Milan Fashion Week is full of great designers and shows. Since its hard to stay up-to-date with its great amount of shows, we’re delighted to keep you posted. Check out the schedule of all fashion weeks here and the complete Milan Fashion Week schedule here.

Creative director Ian Griffiths got inspired by Killing Eve’s Jodie Comer. Super models Gigi Hadid, Candice Swanepoel and Doutzen Kroes were dressed like the actress, who is about to win several prizes at the Emmy Awards.

The collection consists of many tailored pieces, all of them color-coordinated very well. Ton-sur-ton has never been so popular. The Max Mara woman wants to look fierce and chic – something that’s clearly visible at this collection. Imagine the outfits without the socks and other distracting details, and you suddenly have a very wearable look.

Show ready. A look before the models walk the #MaxMaraSS20 runway. See more from the show on our Instagram and Facebook pages. #MFW

September 19; Gigi Hadid walking for @maxmara SS20 in Milan. @gigihadid #gigihadid I don't own any of the images. All copyright go to their respect owners. ? Dm me or comment below if you're the photographer or owner of this pic

The entire collection is very relaxed and – like you would expect – airy. Soft hues and silky fabrics swelled as the models walked the runway. The projection of a fresh and cloudy sky transformed into a moonscape as the outfits slowly evolved in different colors. Watching this gentle collection has a calming effect on the mind, body and soul. Is this a counteract against the fluctuating political state of being lately? We don’t know. What we do know is that we want to watch show how over and over again.

Silvia Venturini Fendi proved she can do without Karl. Fendi describer her collection as a “solar mood”, which described the Italian state of mind on a long summer day. According to her, this feeling makes you ready to take on new opportunities in life.

Silvia Venturini Fendi took new opportunities indeed. As she’s no longer the right hand of mister Karl, she had to take the lead. The collection is very Fendi, though, like we expected. Signature brown hues, combined with flowers and luxurious materials and details. It felt like a Summer party in the ’70s, translated to the 21st century.

On top of this, Fendi understands the importance of wearability amongst appeal. May it be clear that Fendi takes wearability very serious – there isn’t one single heel in her collection. “I want women to feel natural and good in these clothes,” Fendi told Vogue. A woman we admire.

Last February, Bottega Veneta’s Daniel Lee debuted with his first catwalk show. Since then, @newbottegaveneta was born. Lee knows how to dress modern women (and men). He exactly known how his clientele wants to look and feel. His collections are both mind blowing and bestselling.

The two all denim looks were notable for this leather goods brand. However, they looked outstanding. Less surprising, but a true eye catcher was the oversized leather coat in orange – worn just as it is: simple yet elegant. Lee knows the Veneta clientele as much as he understand the brand. While he’s capable of innovating and experimenting with new colors, structures and forms, he stays true to the classic image of Veneta. It resulted in one of his best collections so far. Hurray for Lee.

BOTTEGA VENETA: “I want to be bold, otherwise what’s the point. I’m quite black or white. I want to make a statement. I don’t see the point in making fashion that’s not saying something.” So said @bottegaveneta’s Daniel Lee, the young man who seems to have single-handedly dressed the front row in square toed sandals, leather Bermuda shorts and pillowy clutch bags. Bottega has won the taste game and in the process, Lee has gone from being a total unknown to a designer with a devoted and growing following. Journalists and well-wishers clustered round the Yorkshireman post show, hanging on his every word and just like his designs, his message was clear, concise, uncompromising and delivered with powerful feeling. The opening look – a one-shouldered knit dress, gold link necklace, white quilted mules and a whopping cross body bag – gave everyone in the audience an instant taste-changing frisson. Nobody else is doing these proportions. The fabrics and cuts were impeccable. There were scarf tops worn with leather bermudas (a trend Lee started last season and now seen on every Milan catwalk); Leather and denim carpenter pants worn with matching utility shirts; trench-back dresses that would work for women of all ages; tailored jackets with exaggerated shoulders which tapered to be tight over the hips. His great accessory innovation came with supersized, sack-like hobos worn across the body. Lee may have described himself as black and white but he is a great colourist. His leather parkas were the colour of tomato soup. There were deep aubergine bodycon knits, toffee crisp trenches and ice blue leather coats. This collection thrilled with sophistication. It was softer than his first Matrix-inflected catwalk outing, but no less impactful. Daniel Lee couldn’t be mediocre if he tried. It’s just not in his nature. Instead, restless and righteous, he pushes ideas of beauty, modernity and taste ever forward. He’s the one to watch. #BottegaVeneta #DanielLee #MFW #SS20 #10Magazine 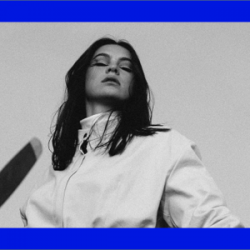 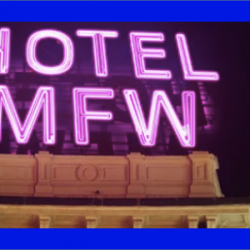