New York Fashion Week has officially kicked-off. We were delighted to keep you posted on the best shows, promising designers and emerging trends. This update: Ulla Johnson, VFiles, Khaite, Helmut Lang and the long awaited return of Rag & Bone on the runway.

Helmut Lang’s menswear outfits would look great on women as well; will we be shopping on the mens department from now on? It reminded us Donatella Versace’s menswear show earlier this year, with Bella Hadid in the lead – covered in a bold men’s suit. Not because the collections looked or felt similar, but because the menswear looks appealed as much to us as those of womenswear did. As you might’ve expected, miss Bella Hadid walked Lang’s show as well. This time covered in a leather dress.

Later on, the looks evolved to a military vibe. Army green became the dominant color, as garments got more rough. Soon after, the hues became more natural, followed by very bright colors and some neon excesses.

Our favorite look? A stunning black model wearing a beige coat with a skin toned ‘naked’ dress. Simple, yet wonderful. The lack of accessories entirely strengthened this look. Soon after, a male model entered the runway, wearing exactly the same ensemble, but then in the form of a pair of pants and a see-through shirt. Again: what would you rather wear? This show taught us to never – NEVER – skip the mens section.

Ulla Johnson’s show at New York Fashion Week can best be described as very, very feminine. The 45 looks were very exotic and tropical. They reminded us of chic beach resorts – in a good way. African inspired prints, ruffles, lace and denim: it might not sound like a good combination, but Ulla Johnson showed that it actually is. Combine these materials with crochet bags, big hair and excessive accessories (with a lot of gold and coral) and you find yourself in a summer mood.

Aside from the colors, prints and materials, the silhouettes were very feminine as well. Big shoulders and an accented waist were part of most looks. Layered, ruffles sleeves weren’t an exception either. It felt romantic, a bit bohemian, but overall very cheerful.

Current brand obsession: @ullajohnson ? SS20 was made up of crochet mochilas, reinvented statement shoulders with an 80s edge, and a gypsy chic aesthetic. This collection had the designer’s signature, but in a fresh way❤️ #nyfw #ullajohnson

Khaite is known for its perfect basics, or – as designer Catherine Holstein likes to call them: cherished items. However, this show was everything but basic (cherised is indeed a better word).

The collection felt like a new take on romantic and victorian grunge, complete with deconstructed suits, puffy sleeves and a lot of bare skin. On top of this, the credo seemed to be “no bras allowed”. Oversized pants with romantic tops gave the collection some sense of chic nonchalance. At the other end, models wore pearls and other beads draped on their heads.

Some of Khaite’s looks were very sophisticated and minimalistic – almost like Old Céline, while others reminded us of Western movies. Overall, Khaite’s runway show taught us that there doesn’t have to be an overall theme within one collection. In times like this, we should dare to mix cultures and swap styles at the same time.

The VFiles Spring/Summer 2020 show reminded us of some soft form of SM, mixed with a hint of grunge and sport. Stacked belts, shiny materials, see-through fabrics, corsets and asymmetric pants form just a selection of the looks. Just like other designers, the creative minds behind the different collections liked to play with deconstructed garments as well. We have to say; they took deconstruction to another – very original – level. Models wearing one colored contact and having deconstructed hair cuts as well, while wearing a coat that wasn’t really a coat anymore. We have to admit it looked a bit freaky, while it actually did strengthen the looks.

Asymmetry was another cornerstone of VFiles’ collections. One-legged pants and asymmetric skirts and dresses dominated the runway.

From the vests phase, to the fedora phase, to the bow tie phase, to the cardigan phase, all the way to Vogue? I can’t even put into words what this means to me y’all. Frfr. I usually have words, but I simply don’t. I walked a high fashion runway show… with Lil Kim… I don’t know what kinda tricks God is playing on me but they brought me here and I’m so thankful. Thank you so much @supocupo and @vfiles for choosing this Blaxican Boy from the West Side of Chicago to walk this wondrous runway. Thank you to my mom and my dad for creating my DNA and for constantly supporting my crazy NYC journey lmao. Thank you to @ladysolpresents for guiding me. Thank you to all @kuumbalynx fam for constantly inspiring me to be my best self and stand strong in my truths. Thank you @missrhea__ and the Prom fantasy fam for teaching me how to walk strong and confident in my uniqueness. And thank you to all my other friends who continuously show me love and keep me grounded. I pray that this is the first of many! More pics coming soon! #Vfiles #VfilesRunway #HighFashion #NYFW

Marcus Wainwright returned to the runway after a three year break. His long awaited fashion show didn’t disappoint. Wainwright made his comeback with many laid-back and New York chic looks. As he told to Vogue, “there wasn’t a true source of inspiration”, because the clothes had to be wearable and relatable. However, the outfits were New York Fashion Week worthy.

The outfits showed the art of layering. Or – even better – layering 2.0. Think of shirts tied around the waist and dresses worn with pants. Combined with a little bit of bare skin, it felt very sexy and natural.

We’re very happy to see Wainwright back on the schedule, as he’s been a missed guest during the past years. Hopefully, he will show next season as well, since he’s simply the best at creating relaxed but sophisticated wardrobes. 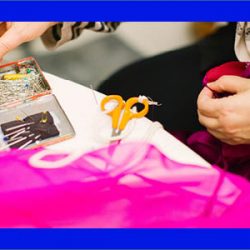