New York Fashion Week has officially kicked-off with three shows yesterday. We were delighted to update you on Tomo Koizumi. It’s the latest designer who stole our hearts with his fluffy and frivolous collection.

Tomo Koizumi is quite a new name in the fashion scene. His over the top dresses caught the eye of Katie Grand and from then on, everything went very, very fast. Grand discovered Koizumi on Instagram and immediately knew he was going to be the next big thing. However, being “the next big thing” isn’t a sufficient way to describe this fashion designer, since he’s very clear about his view on fashion and simply doesn’t want to “be commercial”, as told to Vogue.

Earlier this year, fashion designer Tomo Koizumi showed his collection at the Marc Jacobs atelier in New York City. His creations are intended to inspire, not so much to wear during your daily life. However, we’re the last ones to stop anyone who likes to.

To make a statement, Koizumi solely casted model Ariel Nicholson, who dressed and undressed during the show. Don’t expect 50 looks by the way, Koizumi only created 7 different looks.

Thank you for cheering me up and creating our show together?

Casting Ariel Nicholson was a statement as well. This 18-year-old trans model is a new and fresh face in the fashion industry with an outspoken opinion. Her performance when dressing and undressing was great, but not necessary: Koizumi’s creations speak for themselves. Hundreds of meters of ruffled Japanese polyester organza were enough to keep the crowd fascinated. After the show, he told he just wanted to “make people happy”. Well, he can check that off his list.

Other cut for @thelovemagazine shot by Tim Walker??

Check out his entire collection here. 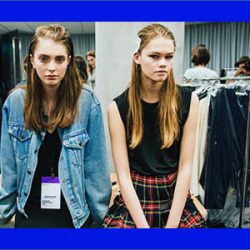 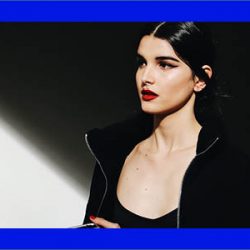