Fashion month has closed with a bang. We saw many great shows, trends, designers and street style. Let’s round up with the best Fashion Week in general.
Cover photo: © Pexels

It’s been a hectic month. Not only did the four biggest fashion weeks dominate the streets of Paris, Milan, London and New York, the coronavirus was without doubt the biggest talk of town – and for good reason.

Marc Jacobs’ closing show shut New York Fashion Week with a bang. His show formed an ode to the city, with models walking around like pedestrians. We have to discuss his casting, tough. Jacobs is known for his mix of high end models of all kinds, together with celebrities. This time, Miley Cyrus made cameo in a black bra – looking more fierce than ever.

Choreographer Karole Armitage opened the show with a solo performance, after which several dancers followed. Together, they created a true spectacle. At Jacobs, it’s not just about the clothes. He rather likes to entertain his crowd, while telling a story. This time, the story was about New York City back in the days. There was a nod to the ’60s and the some of the city’s fictional characters. Think of a Peter Pan-inspired dress and Bella Hadid looking like Audrey Hepburn in Breakfast at Tiffany’s. Check out the full report here.

Move. When you have the opportunity to work with the most talented, creative and energetic people in the world. #dreamscometrue #respect #nyc @karolearmitage @marcjacobs RUNWAY MARC JACOBS 02.12.20

Virginie Viard created one of the most daring and frivolous Chanel collections ever. She used the Seine as her main source of inspiration, which was most visible in the decoration at Grand Palais. Where Demna Gvasalia used real water for his Balenciaga show, Viard sticked to an optical illusion – a safer option.

Models entered this extraordinary runway as duos and triplets. Alongside them, there were white layered platforms, suggesting Seine’s banks. The Seine’s history played a large part in Viard’s collection as well. Viard went back to times in which the river was at the heart of the city and home to traders, travelers and even pirates.

She translated these three kinds of people into her collection. At first, there were the boots: chunky yet classic, consisting of both black and cognac leather. They were combined with the so-called pirate blouse, which would’ve looked well on mister Jack Sparrow himself. Front-split trousers and big shoulders also played a big role, hinting to this heroic era.

Furthermore, the pirate booty was worn on the models’ chests and around the hips. Just like last season, Viard carried on the hip chain trend – with success. Check out the full report here.

At last, there was one striking thing. Chanel isn’t known for its inclusivity and diversity concerning model casting. For this show, however, Dutch curvy model Jill Kortleve was the first curvy model within ten years to walk a Chanel show. Find out more about her history-making walk here.

Between Daniel Lee’s last how and this one, he received four London’s Fashion Awards – more than any other designer has even won in a single time before. Being designer of the year and working for the brand of the year, we can imagine this puts some pressure upon one’s shoulders. Yesterday’s show was the perfect example of how Lee handles this sudden media attention and showed his incredible talent.

Last season everyone walked away with Veneta’s pouch bag, together with its strappy sandals. For this collection, Lee got inspired by the very beginning of the fashion house. “Everything was made so soft and subtle“, he said. Furthermore, his starting point was comfort, but in an elegant way. How could he otherwise dress his own generation – one for whom comfort is key?

Therefore, Lee built in some stretch to his collection. Literally. The result? Bottega Veneta as the coolest brand of this Fashion Week – or, even better – the world. Check out the full report.

Wow. The first word popping up on our minds when watching Mugler’s Fall/Winter 2020 show. Back in the days, Manfred Thierry Mugler had his thoughts about sexiness. Without doubt, Mugler’s current creative director, Casey Cadwallader, has these thoughts too.

We can state that barely one of his looks were safe for work. Cadwallader’s naked items will be trending on Instagram and worn by Mugler’s famous clientele. Hence, the creative director showed the versatility of leather – a trending material. It gave the collection an extra dose of sexiness.

And then we haven’t even discussed the show’s casting, which was as jaw-dropping as the collection itself. It was diverse and over the top. Stunner Jill Kortleve, Bella Hadid and many other amazing models walked the runway fiercely, while wear some kick-ass empowering and sexy ensembles. Cadwallader embraces sexiness in every size and expresses himself via creatives excesses at Mugler. We simply can’t get enough. Check out the full report here.

Rejina Pyo’s show started with a statement: the loud noise of a starting engine and the bright headlight bedazzling the photographers. “It’s a statement about everything that’s going on in today’s world – from Trump to the coronavirus,” Pyo said. Likewise, the venue was sober. Pyo is one of the designers taking sustainability serious. For example, she stopped sending hard copy invitations and swapped them for email instead.

However, the controverse surroundings and show didn’t quite correlate to Pyo’s collection. At least, this connection wasn’t visible at first hand. The collection was sophisticated, strong and sometimes even glamorous. Stunning models like Vera van Erp, Daniela Kocianova and Nya Kong fiercly walked the runway wearing powerful clothes. During the show, you’d soon notice that this might be Pyo’s strongest and best collection until now. We’re excited for everything that this designer will create in the future.

Mike Eckhaus and Zoe Latta created an eclectic mix of familiar silhouettes and surprising layering of divergent fabrics. After the show, they explained that they took fashion elements that used to make them at unease; think of mini dresses and ruffles. They simply wanted to explore how these types of clothing would workout from their perspectives.

And so it went on: there were sequined dresses, there were glitters and a lot of glamour. Not very common for the creative duo. Shapes varied from utterly feminine to boxy and straight. Furthermore, the tailoring was on point. Female models wore some sleek satiny trousers, combined with matching jackets.

The entire collection felt very sleek and accessible. We bet that your Instagram feed will be overloaded by these items within a few months.

F.A.S.H.I.O.N. Thank you @wallplaynetwork @seaportdistrict.nyc the South Street Sea Port but most of all Abercrombie & Fitch for building these glorious staircases. 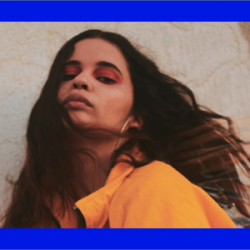