Photographer Anna Beeke on her fascination for woods and cruise ships

Meet photographer and documentary maker Anna Beeke. The American talent has received multiple awards for her breath taking photography and is currently working on a Netflix documentary. Read everything about how she gets inspired and her fascination for strange pursuits such as cruise ship holidays.

Photographer and documentary maker Anna Beeke has been a busy bee since a young age. When she grew up, her father had a photography dark room situated in their house, so Anna grew up surrounded by photography. At school she shot photos for the yearbook, was photo editor and did many other photography related tasks. Her first ‘real job’ was for a Queens newspaper, short after she enrolled in a photojournalism and documentary making course. That was the moment she began to realize that she could make a living from photographing.

Anna Beeke has a fascination for forests. In fairy tales and ancient stories, forests represent mythical power and a mysterious source of life. Beeke didn’t have the plan to shoot forests around the United States, until she got to San Juan Island. She tries to capture other objects first. On a determinative day, she found herself surrounded by the woods and got mesmerized by it. The dark and ancient woods took her back to her childhood and fascination for the mystery it seemed to keep. This led to her series Sylvania, Latin for woods. With photographing the forest, she attempted to capture the essence of it. Think of the trees, fresh air, darkness; the entire experience. After capturing the Northwest Pacific, she also travelled to other forests across the U.S.
[story continues below photos]

At Sea – the cruise ship series

After finishing her Sylviana project, photographer and documentary maker Anna Beeke had a new fascination: the sea. Cruise ships and the people who go on cruise ship holidays also intrigued her. She never got why people would go on such holidays, so she decided to go for the full experience and booked one herself. Since cruising is one of the fastest growing branches within tourism, she felt she had to do something with it. After wandering through the forests by herself for years, she was ready for a new challenge – a social one. With this series, she aims to capture photos with a sense of humor. She portrays how humans interact with nature and how the cruise-goers enjoy the holiday part of the American Dream.
[story continues below photos]

As the busy photographer and documentary maker Anna Beeke is, she is currently working on a documentary for Netflix, which will be launched in September 2019. We can’t wait to hear more from this inspiring lady.

Quite impressive, don’t you think? Just like photographer and documentary maker Anna Beeke, there are many more inspiring women you can learn from. Check out our section dedicated to our female heroes here or our section on photography here. 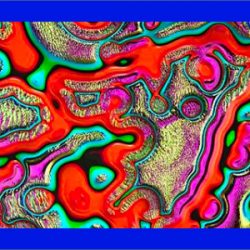 previous post
Contemporary artist Rose Pilkington knows the effect of color on the mind
next post
Fashion brand EVERYBODY.WORLD – a game changer in the fashion industry